I don't often talk about non-fiction the way I do fiction, but I have my share of beloved non-fiction books. One of the first I remember reading, and the best-loved, is Longitude, by the incomparable Dava Sobel. I'm on my second copy, and this one is falling apart.

Longitude is the story of John Harrison, the 18th century carpenter's son who became the greatest clockmaker of his age. With no formal training, Harrison invented some of the first precision clocks - and his five Sea Clocks stand preeminent in the history of timekeeping as the very first clocks capable of keeping accurate time on long sea voyages.

At the time, 'clock' meant 'pendulum clock', and it's essentially impossible to keep a pendulum swinging steadily on a swaying ship. Harrison did away with the pendulum entirely, introducing a dazzling array of new devices into his first three sea clocks. They were originally in wooden cases, but I think they're far more beautiful as they are now: uncased, with all their brass workings on display.

H1, H2, and H3 are an ordered progression, an evolution of the sea clock, but H4 is something completely new. Somehow, impossibly, Harrison took all the precision and accuracy of his three great clocks and focussed it down into a slightly outsized pocket watch. H4 still has its metal case, but the sheer understatedness of it is just as impressive as the jewelled cogwork of its predecessors.

All this precision clockmaking was so important because of - well, the title of the book gives it away. If you're out on a sailing ship, it's trivially easy to tell how far north or south you are, by simply looking at the night sky. But the longitude - how far east or west your ship is - can't be determined in the same way. Right down to the 18th Century, ships navigated by dead reckoning, saying 'I think we're going this fast, so we should be about here'. The number of shipwrecks was staggering.

Countries around the world offered prizes for anyone who could find a reliable method of determining longitude at sea. The general approach was to find a way to know the time in two places at once - longitude is closely related to time zones, so if there's one hour difference between your location and your home port, you can easily convert that into distance. John Harrison's clocks were the very first way to carry the time in London with you on voyage, and calculate your longitude by a quick look at the sun.

Harrison earned the longitude prize - £20,000, equivalent to over £2.5 million today. He should have been given the longitude prize - but he wasn't. The reason he wasn't was that the Board tasked with judging the prize was stuffed with astronomers, and they had their own pet methods of calculating longitude. The elegance of watching Jupiter eclipse its moons, or plotting the movement of our moon against the visible stars, was far more exciting (not to mention potentially profitable) to them than some fancy clockwork.

Of course, their methods didn't work - not at sea, on a moving ship. But they didn't let that stop them. Sure, H4 seemed to meet the required standards of accuracy on its trial voyage - but maybe that was just luck. Harrison's watch needed to make a second viyage. And then had to be tested on land by the Astronomer Royal, who just happened to be Harrison's chief nemesis. Oh, and Harrison needed to show that he could duplicate the watch.

That duplicate, made when Harrison was in his seventies, was H5. It was not a precise duplicate, incorporating several new developments, but also displaying the weariness of its creator. Dava Sobel describes it as being made by "a sadder but wiser man", and talks at length about the loss of the ornamentation from H4:

This timekeeper, now known as H-5, has all the internal complexity of H-4 but assumes an austere outward appearance. No frills adorn its dial. The small brass starburst in the center of the face seems somewhat ornamental, like a tiny flower with eight petals. Actually, it’s a knurled knob that pierces the glass cover on the dial; turning it sets the hands without lifting that glass, and so helps keep dust out of the movement.

Harrison perhaps intended the star-flower as a subliminal message. Since it recalls the position and shape of a compass rose, it conjures up that other, more ancient instrument, the magnetic compass, that sailors trusted for so long to find their way.

The backplate of H-5 looks barren and bland compared to the exuberant frippery scrolled over the same part of H-4. Indeed, H-5 is the work of a sadder but wiser man, compelled to do what he had once done willingly, even joyfully.

All of which is just so much words, though moving ones. I recently came across photographs of the two watches, and was viscerally struck by the contrast between their backplates. This is H4: 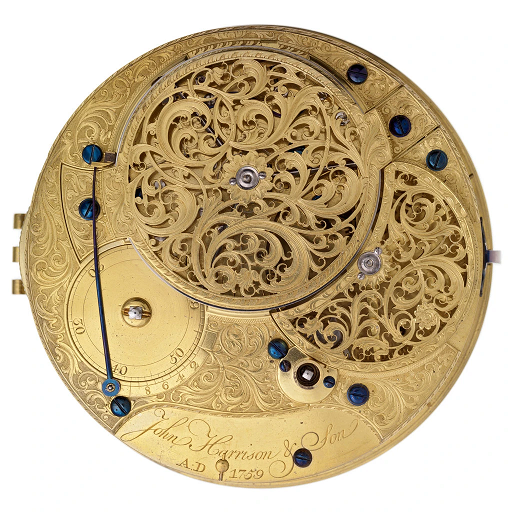 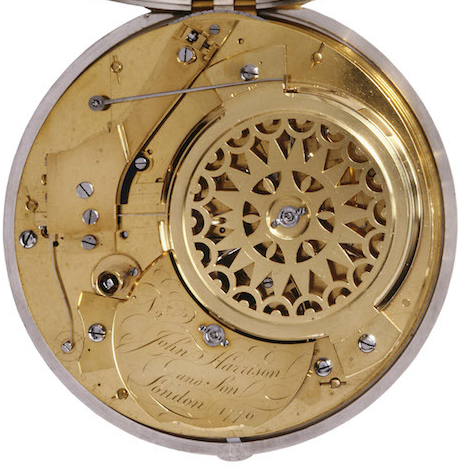 I almost recoiled when I saw this. All his life, John Harrison had made beautiful clocks - now, his final creation was... workmanlike. Grim. There was no art any more - just artistry.

And yet... the reason it took me so long to realise that photos must exist of the the watches, that I could see what Sobel described, is that her description and prose was so vivid that I never felt I needed to. I couldn't have told you what the inside of H4 looked like until this last week or two - but I absolutely could have told you how its maker felt about it.