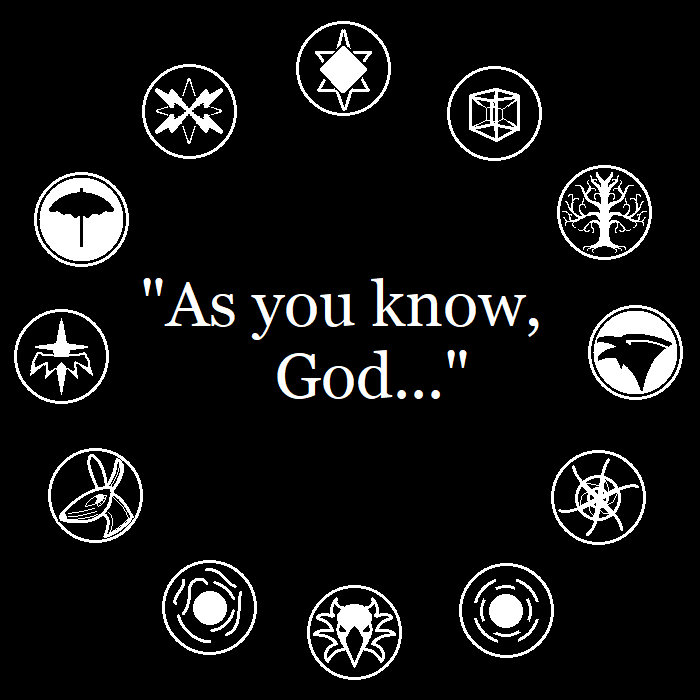 "Once again, we return."

Each of the gods had received an invite to the gathering. Not all had responded - some had no interest in their fellows, some found more interesting things to do, some found themselves unavoidably detained.

Those who attended found a large circular table, each of its twelve chairs ("thrones" would be too grandiose a word, though a couple did appear to be Galactic Tyrant-brand Executive Pivoting Helium-Cushioned Mobile Thrones of Glory) marked with the symbol of a god. Ananke stood by the door, greeting each of them as they arrived. When all had settled into place, she walked slowly around the table and began to speak.

"Children," she said, a smile creasing her lips, "welcome to the Recurrence. By now you have all come to know who you truly are, and to remember the things you can do. This is well and good - you are the gods, and your powers are your right and privilege."

Her blue eyes darkened a little behind her veil, as if shadowed by past memories. "But be cautious in the miracles you share. Even in this place," she flicked a hand, taking in the whole of HQ, "mortals are fragile beings. The divine should not toy with the lives of the earthly, even if - or should I say, when - they reject and resent you.

"You will be hated. You will be loved. But most of all," the smile flashed across her face again, "you will be brilliant. And I am here to serve you. Simply ask, and I will share with you all that I know. For you are the children, and I am Ananke, and this is how it has always been." 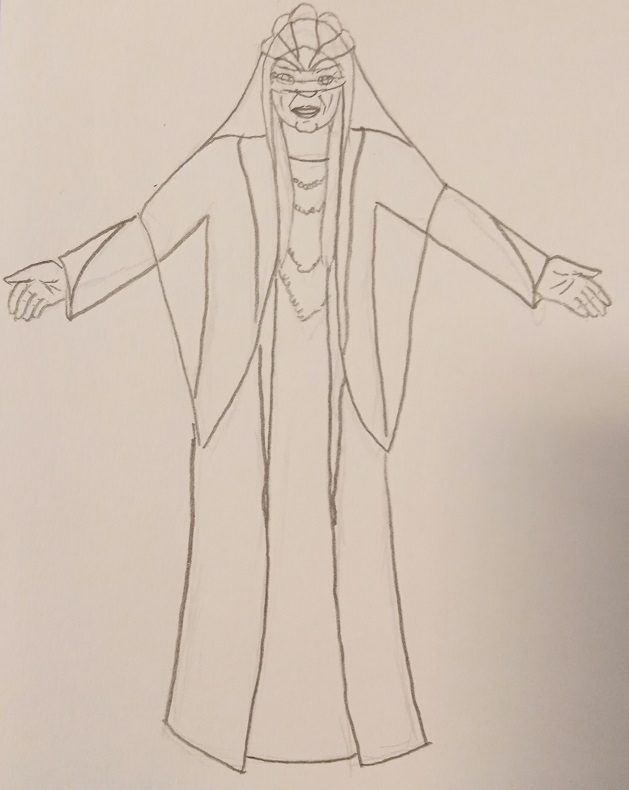 There she is at last - trouble Necessity herself. I'm actually really pleased with how her portrait turned out.

This is after all the ascensions, but before Yavanna's concert. The gods are currently known mostly to whoever's run into them, and their musical powers are essentially unknown.

If it comes up, the circle image is the seating plan in the chamber. So Yavanna, for instance, is between the Ellimist and the Raven Queen.

I'll kick-start the RP - Yavanna has something to say - but after that go nuts. The gods can talk to each other (though wait until someone is known to be there), or to Ananke. Feel free to write her responses yourself if you want, but I'll also be around to answer questions in-character.

One note about the setup that I should get out of the way, intended solely for those who've read/looked up The Wicked + The Divine: Spoiler mostly for the end of this event.

If anyone needs to know more about why all of this is happening (looking at your investigation, Scape, which I think is brilliant by the way), feel free to drop me an email. I can provide spoilers for either WikDiv or this event, but obviously prefer not to do so here!